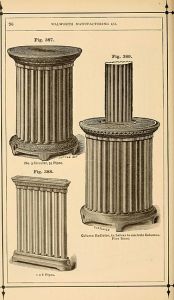 My husband didn’t hear me the first 200 times I said, “Add water to the steam boiler reallllly slowly.” He’s from a part of the country where the populace prefers less catastrophic methods of home heating. So when the boiler quit due to low water, he descended to the basement, located the cold water valve, and let ‘er rip.

Steam heat is one of those Northeastern traditions, born of cheap coal and hard winters. You shoveled coal into a boiler, and the resulting steam swarmed up through cast iron pipes to heat colossal, iron radiators. Sure, the radiator valves leaked a little, and the pipes hammered, and every week or so you had to add water to the boiler reallllly slowly, but… inertia. And in the 1970s when people began to give one tiny darn about fuel efficiency, it became apparent that steam boilers would never measure up… well… The heat was so nice, pulsing so steadily from those masses of iron.

Adding to the comfy inefficiency of steam, the radiators tend to be too big. They were installed in the early part of the 20th century, when houses had single-pane windows and no insulation. During the decade after the Spanish flu epidemic of 1918-1919, radiators got even huger: They were sized for houses in which the windows were left open at night, all winter, to blow away the germs.

As homeowners insulated and weatherized over the years, the mismatch chafed. Most steam radiators retain at least some flaking paint not because it’s pretty, but because slapping on metallic paint reduces a radiator’s effectiveness–intentionally. Ditto for those boxy radiator covers. In apartment buildings of a certain age, there’s an entire cottage industry bent on out-witting the infernal steam radiators.

Well, my husband has beaten ours decisively. Cold water struck the red-hot intestines of the iron boiler, which shattered just the way the manual said they would. A pool of rusty water spread like furnace-blood across the floor.

I made a quick survey of the inefficiencies in this system:

Inefficiency of the boiler itself: Steam boilers always waste at least 15% of their fuel. Because my house is well insulated, my boiler was actually too big, further eroding its efficiency.

Heat loss to basement from mammoth, cast iron pipes: A lot, even though I wrapped them in insulation.

Radiator inefficiency: Between the dust, the paint, and boxy covers, a ton. Maybe 30-40%.

These various losses are apples and oranges, but they add up to a rotten fruit salad.

This house turns 100 this year. I think a century is long enough for the original technology to prove itself. We’re giving it a 21st Century Viessmann 222F direct-vent gas boiler with 98% fuel efficiency, three pump speeds, outdoor temperature sensor, and built-in domestic hot water tank–along with some flat-panel radiators, each one a zone unto itself.

We’re leaping a hundred years in a week.

What could go wrong? 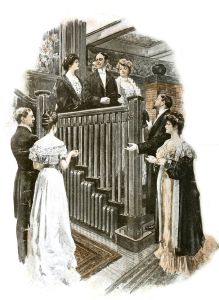 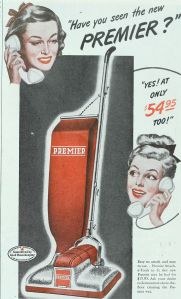 Knob-and-tube wiring, the antique technology that strikes terror in the hearts of home buyers, is not a fire hazard! In theory. Technically. Much.

So says this report, which examined the rate at which the early 1900s wiring starts house fires. After studying a bunch of fires and fire-trap houses, these investigators concluded:

“Properly installed and unaltered K&T wiring is not an inherent fire hazard.”

But what the heck is knob and tube wiring, you ask?

It’s the aboriginal electrical wire, standard equipment from the 1880s to the 1940s. It carried electricity into your house in copper wire wrapped in cloth insulation. As they snaked through the walls, the hot wires were kept clear of the flammable wood with ceramic insulators, some shaped like knobs, some shaped like tubes. 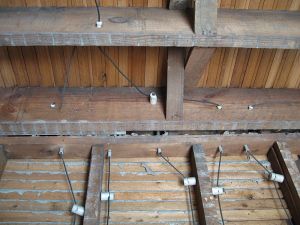 Although K&T has been rendered obsolete by wire that’s wrapped in a metal or plastic jacket, remnants of the “legacy wiring” remain alive and well in many older houses. And contrary popular perception, it’s not particularly hazardous! I’m pleased to have found this study, in part because my Dad always contended that K&T was actually safer than the new stuff. But because he was prone to skepticism in the face of most technological “advances,” including computers, vacuum cleaners, and the clothes iron, I wasn’t entirely sure I should trust him on this point. Apparently, I can.

So, yay! K&T is a much maligned and innocent technology!

Now, there are just a few GIANT caveats:

1: In an overhead light fixture, the heat of the bulb can slowly cook the cotton insulation off the copper wires. I stumbled upon this situation in my 1918 bungalow, and the black char marks on the ceiling plaster were legit scary.

2: Adding insulation over K&T can allow the warm wires to heat up and set things on fire. An awful lot of old houses have had insulation blown blindly into their walls and attics over the years.

3: Those pure and original K&T circuits have been tampered with over the years, pushing them WELL past their design specifications.

Now, how do you know if someone has twiddled around with your original K&T?

Oh, we just know they have: When these houses were built, electrical fixtures were limited to an overhead light in each room, and a couple of outlets for the Victrola and one of those crazy new toasters.

But since then, a tidal wave of electrical inventions has washed through the marketplace, and into the house. When the electric razor appeared in the 1930s, your Grandpa had to have one. He spliced a new wire into the old K&T circuit in the basement, and poked it up into the bathroom wall to power a new outlet. Electric refrigerator? Splice in another branch! Vacuum cleaner? New outlet! Washing machine? Electric iron, fan, coffee percolator, radio, television, microwave, clothes dryer, cook-stove?

Each with the risk of untwisting, or touching something flammable, or lacking sufficient insulating tape!

So it’s mixed news, really: K&T is not inherently a fire hazard. But exherently, it really might be. It probably is. I’m glad mine is all gone. Sorry, Dad.

This Pecha Kucha presentation was so much fun. I learned one million things, and gained an even greater affection for this pragmatic place called Portland, Maine. Six minute video. 13,000 years of history. You can’t get much more value than that. 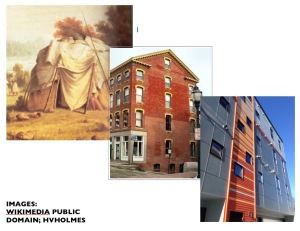 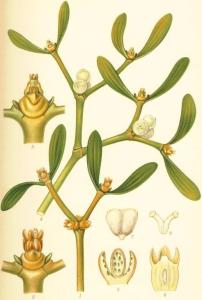 It’s meant, according to my favorite folklore, to go over the front door, not to dangle from an interior doorway. And the kissing is not meant to be the boy-girl kind.

Though there are 700 hypotheses on the origin of hanging mistletoe over a door, here’s my best interpretation:

(First, assume any plant that’s green all winter gets special attention in the north. Mistletoe is one of those.)

Now assume it’s the Dark Ages and there are no police. People, being people, are going to peeve each other, take one another’s sheep, slay one another’s relatives, etc.

There are also no Hallmark cards to send, with pretty writing inside that says, “All right, forget about the five chickens you owe me. I miss having that beer you make.”

Come the mid-winter festivals of “oh my god will this this darkness ever end,” people would bring green plants indoors to remind themselves to not kill themselves just yet. And there being no TV to watch, they invited the neighbors in for some story-telling.

If neighbors were slow to materialize, paralyzed by self-consciousness over stolen goods or murdered relatives, a signal was needed to indicate that, today at least, the need for company is greater than the need for vengeance. Remember that reading was practiced mainly among monks. So in Scandinavia, up went the mistletoe over the door–the exterior door, so that you knew from a distance you would be safe.

So says my favorite folklore: All who entered were assured of forgiveness.

The kissing? Kissing was not always romantic and spitty. Consider the Pope’s ring. Jesus and Judas. Kissing used to be really big in the sorting out of status. And as a symbol of allegiance. To kiss under the mistletoe was actually redundant: Both signaled that you were on the same team.

Today, anyway. Winter is long up here on the shoulder of the planet. It wouldn’t hurt to keep that mistletoe up for a while. 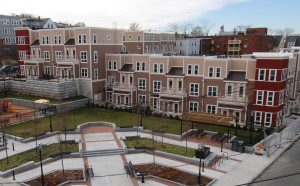 So this pile of boxes won a big prize. Well, this and a few other components in the redevelopment of the old Box District in Chelsea, Mass. Together they won the Jack Kemp Award for Excellence in Affordable Housing. Yay. Nothing wrong with that.

But how do we feel about the way this looks?

Architecture is doing this now–boxes. All over Munjoy Hill, and now in the West End.

Of course, nothing in the world makes more sense than a flat roof–if it’s covered with plants and/or solar panels. On the other hand, New England’s history is one long tale of pitched roofs. On occasion, an Italianate bay window elbowed its between the typically flat and somber facades. Clapboard, shingle, and brick were the only sidings a respectable Pilgrim would consider.

Change happens, however. This award-winning development is platinum LEED certified, efficient, and even located on a mass-transit line, which is fantastic. The larger project revitalized what was formerly the neglected grave of a cardboard box factory. Yay.

I’m just not sure I understand what this design is talking about. What is it saying to the buildings around it, to the ground beneath it, to the climate overhead? Housing design, like clothing and hair styles, is subject to fads. Some styles age better than others. How will the Box Era be judged in the coming decades?

In defense of the Box, I felt certain when the USM library got its

makeover that God would smite it from the face of the earth, and that has not happened. Has it aged well? I don’t know. Maybe it’s acquired the sort of patina a cardboard box gets after a winter outdoors.

But this Munjoy Hill design, in a neighborhood of restrained and Pilgrimmy buildings: In 20 years, will this blend in? Or will anyone care?