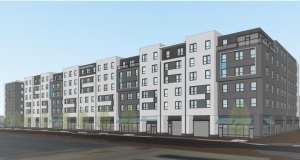 The technical name for the stuff is EIFS–Exterior Insulation Finishing Systems. The reality of EIFS: Styrofoam stucco. The problem: This exterior finish wants in.

I’m not presuming that the Miami developer behind the huge-ish housing complex proposed for Portland’s Bayside is committed to cladding that conglomeration with EIFS. I’m just saying that this rendering looks quite a lot like the finish you’ll find gracing the exterior of your local Target store.

Above is one of the four buildings now proposed for the strip along Somerset Street behind Trader Joe’s and the former DHS building. This thing will face a dignified, old, brick-clad building across Somerset.

Right: Monotonous facade offering “unvaried pedestrian experience.” Speaking as a pedestrian and a hater of change, I like it just fine. Left: TBD. Image: Google Maps

I’m delighted to read in The Press Herald that Portland Planning is leery of both EIFS and vinyl siding for this colossal project. That’s major.

I am, however, alarmed that some feel the proposed facades are “monotonous,” and insufficiently varied in terms of materials.

IMHO, they are not nearly monotonous enough, and the variation embodied in those scuba-mask projections and the random green squares combines the worst of the 1960’s and today’s tarpaper-townhouse aesthetics. Taken as a whole, the design reminds me of the Holiday Inn on Spring Street, which reminds me of a neglected beach in Florida.

While I’m kvetching, may I note that those roofs look suspiciously similar to parking lots, and not much like green roofs or solar arrays?

Now, to stop kvetching: I get that Portland housing costs are way too high for normal people. And that bricks are expensive. And that StyroStucco is cheap. And that vinyl is final. I get that. I vowed to tear the vinyl off my 1918 bungalow the day I bought it. Instead, I put on an addition with more vinyl. Some day, I’ll get around to adding plastic shutters, which will vary the materials and the pedestrian experience, and make the addition look less like an angular, white tumor.

Human shelter is an exercise in compromise. Its first job is to keep humans warm and dry. Its second is to ruin the planet as little as possible. The rest is up for debate.