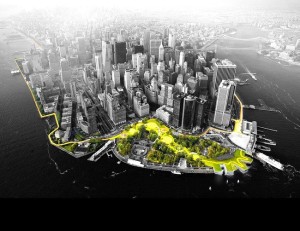 Yesterday’s United Nations report that nobody’s doing diddly to slow climate change puzzled me. Haven’t they heard about the U.S. Department of Housing and Urban Development (HUD) contest to design a bunch of dikes and stuff?

Just this summer HUD announced nearly a billion bucks in funding for clever designs to Sandy-proof Manhattan and Friends. At a press conference, a HUD official distributed cool fake-photos of dikes and declared, “Bring it, climate change! Game on!” (Not really.)

Two winning designs featured man-made improvements on what, in a more unkempt era, went by the name of “wetlands.” A Staten Island project will employ modern “rocks” to form innovative underwater barriers that will be called “reefs.” The winning plan to barricade the entire Meadowlands marsh inside a brand-new ring of elevated roads-and-condos has generated a trickle of controversy, given that this may just divert flood waters to unsuspecting and dikeless towns.

I had wondered where the first dikes would rise. My money was on Florida, but of course everybody else’s money is in Manhattan. Fortunately, not all of Manhattan requires diking, as the elevation of the island actually rises as you head north. So only 10 miles of dikey parks, or parky dikes, will be required to wrap the southern portion. 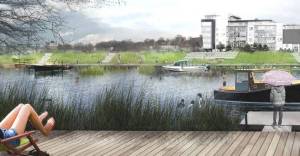